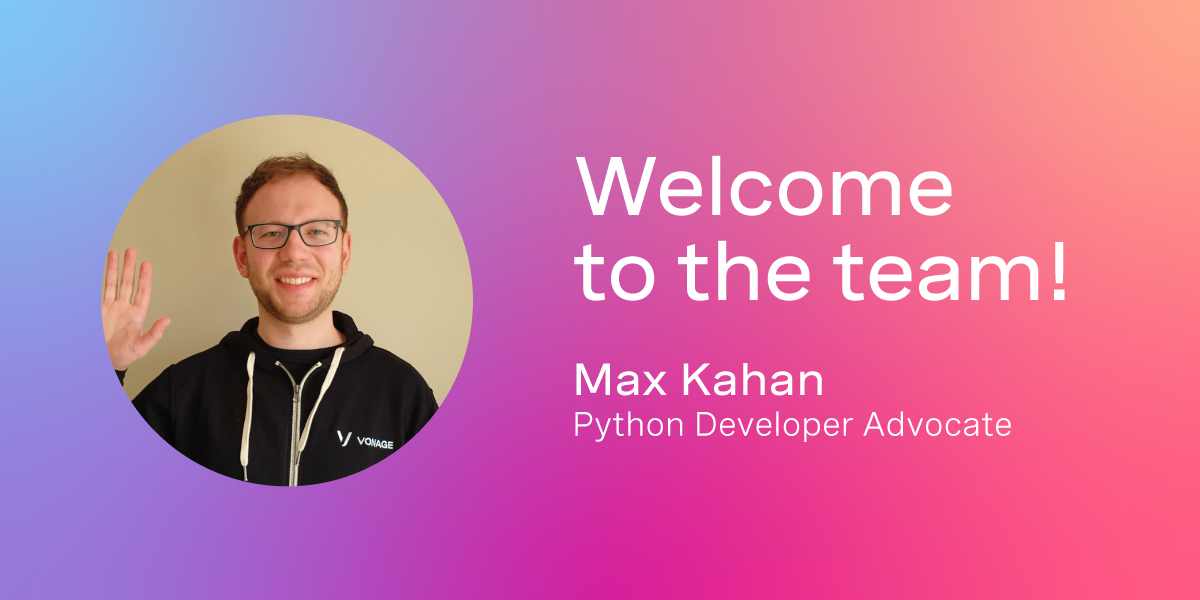 Hi! My name’s Max, and I just joined Vonage as a Python Developer Advocate. That means anything Python, or anything communications APIs, and I’m probably interested!

How Did I Get Started? Disappointing NASA.

Python first appeared on my radar after I couldn’t get a project done for NASA. I was a Physics student with a summer job in an experimental cosmology lab. The project I was working on was funded by NASA and focused on lasers - actually, focusing lasers on spacecraft to propel them. I was super excited to be involved!

What I didn’t realise beforehand was that in order to control a laser array, I needed a whole lot more computing knowledge than I had! As a Physics student, I'd only learned to code to graph lab results and compute confidence intervals. I made some headway, but if I’d known how to do some relatively simple machine learning, I would have crushed the problem.

A Change Of Career

After this, I returned to the UK to complete my master’s. After my NASA-themed struggles, I decided to do my master’s project on Machine Learning for Nanotechnology, this time teaching myself Python and training convolutional neural networks. As a result, I was able to help a lab find good nanowires to study, saving many hours of manual work.

As the project progressed, I grew to understand the incredible ability that code has to solve problems and help people. Feeling inspired, I decided to get a job as a software engineer and developer advocate at IBM. I learned an awful lot about enterprise messaging, as well as just how many awesome people hang out in the development community. I decided I wanted to stick around!

What Will I Do At Vonage?

The main focus for me will be the Python SDKs that let you use sms, voice, video and more in your Python applications. I’ll also be working on the verify, dispatch and number insight APIs, as well as all the usual advocacy stuff - giving talks, making videos, writing stuff and generally sharing tech stuff I’m passionate about.

Well, that’s the “about me” stuff over with. If you want to connect, reach out to me on Twitter at @max_does_tech. I look forward to speaking with you soon!