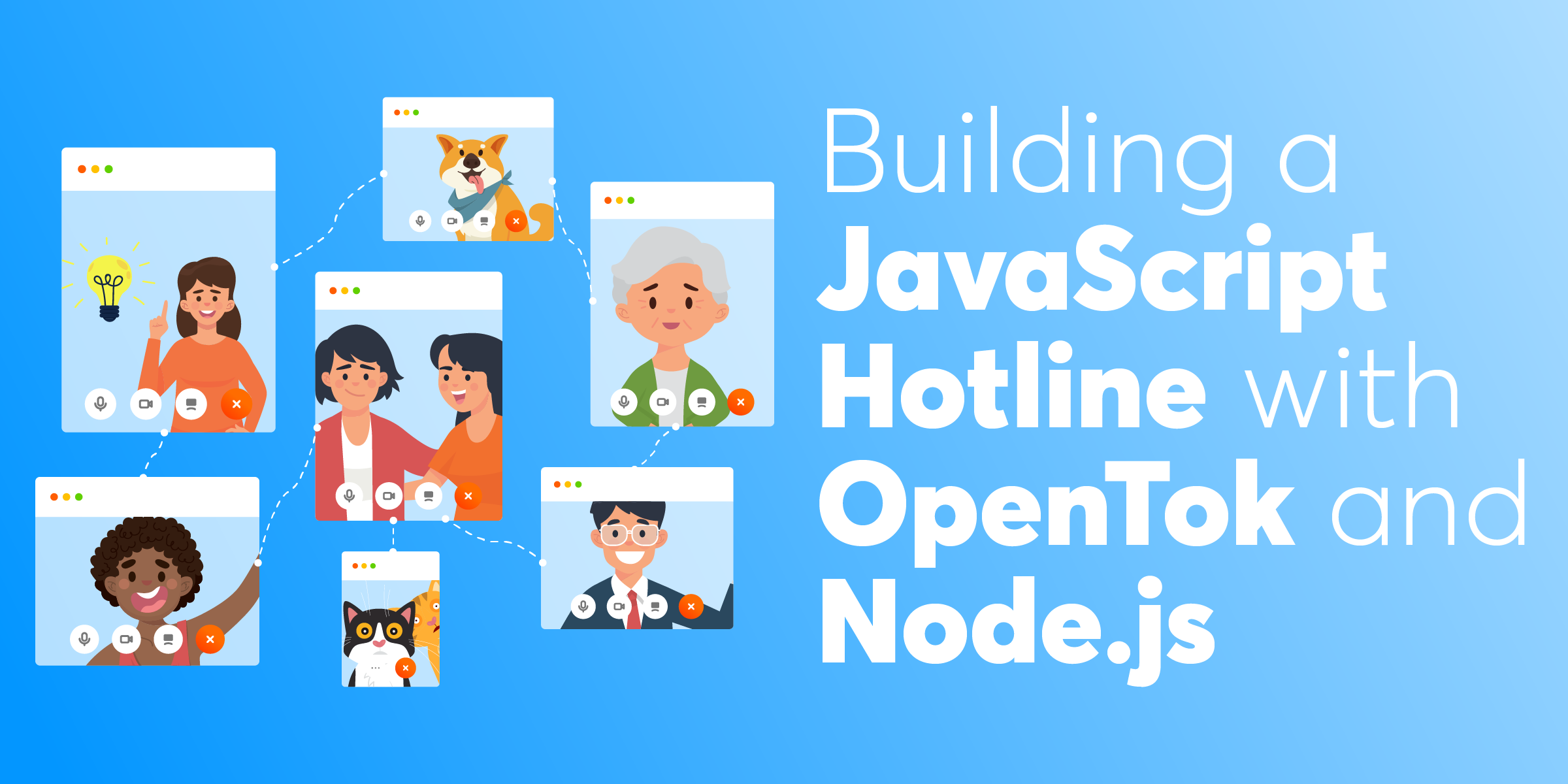 Building a JavaScript Hotline with OpenTok and Node.js

Once upon a time, when people had questions about JavaScript they went to IRC (Internet Relay Chat) to find someone to answer them. IRC is a very old technology in Internet years, though. Many JavaScript developers these days may not even have an IRC client, or ever have used one. Most, on the other hand, are very familiar with video chat.

OpenTok already makes it quick to get started with a simple video chat between two participants. With a little queueing logic added, you can have a hotline for JavaScript questions, or anything else, in no time.

Getting Started on Glitch

If you want to skip to a working project you can remix the JavaScript hotline project on Glitch right away. Otherwise, in just a few steps you can code your own hotline from scratch. To begin, create a new project on Glitch, choosing the hello-express template.

To provide video chat with OpenTok, opentok is actually the only additional package you need. Adding the option to get a text when someone needs a question answered will make the hotline more able to cope with variations in user volume, though. To support that you can also install body-parser to receive form input and nexmo to send your texts:

You can repurpose the example server.js, index.html, and client.js files already in your Glitch project. That means your setup is pretty much done.

Your .env file will look a bit like this:

To provide real values for those variables, you'll need developer accounts on both OpenTok and Nexmo. You'll also need an OpenTok project and a Nexmo virtual number.

Within your OpenTok account dashboard, create a new project for your hotline with the "OpenTok API" project type. After giving it a name and selecting a video codec (VP8 should be fine), you'll see its API key and secret. You can paste those into OPENTOK_API_KEY and OPENTOK_SECRET, respectively.

Your Nexmo credentials, which you can paste into NEXMO_API_KEY and NEXMO_API_SECRET, should be visible on the the "Getting Started" page of your Nexmo Dashboard. You can use any phone number from "[Your Numbers](https://dashboard.nexmo.com/your-numbers" without configuration for FROM_PHONE, since you'll be texting from the number but not receiving texts or calls.

Setting Up the Server

Your server already includes some initialization, a view route for the application root, and a listener that starts the server. You can modify the initialization section a bit to also use the body-parser middleware:

Below that block you can add new OpenTok and Nexmo objects initialized with the values from .env, and two empty arrays. waiting is for the session IDs of chats waiting for a helper to answer a question, and helpers is the phone numbers of people who've offered help during downtimes when no one had a question.

In the rest of the file, between the default route and the listener, you can declare the other routes. Below them you'll need a function to text someone who's offered to answer questions:

Adding Participants to Ask and Answer

The most basic function of the hotline application is to connect a person asking a question with someone offering to answer one. The most direct way to accomplish this is to create a video chat session when someone declares they want to ask something. Then you can add the next available person wanting to answer as a second participant. You could create a more robust way of handling these active sessions using a data store, but for testing purposes an array should be fine.

When someone has a question you can create a new OpenTok session and store its ID in the waiting array. Then you can respond with the new ID, the application's OpenTok API key, and a token identifying that specific client:

You can see that the /ask route, as a final step, checks the length of the helpers array. If it finds items in it, it calls the textHelper function. We'll discuss textHelper separately below, but if you want to simplify your hotline by only connecting people currently using your app you can remove that entire conditional.

Now when someone offers to answer a question, you can send a similar response object with values for the first session in the waiting queue. If it's empty, you can send a response indicating to the client that there's no one asking for help at the moment:

Texting a Helper When Someone Asks a Question

It complicates our existing workflow a tiny bit, but allowing potential helpers to provide their phone number and receive a text when a new question session is ready lets the hotline cope better with slow periods.

Saving someone's phone number is only a few lines of code. The /text endpoint receives the phone number in its request body and can then add it to a helpers queue. It then returns an "OK" status:

We can now make use of the helper's stored phone number in the textHelper function that gets called by the /ask route. The function gets the first phone number from helpers and texts it a link to a specific video chat session:

If someone follows a session link texted to them the client can request credentials to join that specific session from the server. The application can safely remove the session from the waiting queue once it's actually requested:

For testing it's simplest to keep all your HTML on one page. The example index.html already imports client.js. Above that script tag, you'll also want to import the OpenTok client library from OpenTok's servers:

You can replace the contents of the <body> tag with three blocks: buttons to kick off the process of asking or answering, a pseudoform to collect phone numbers of people who'd like to receive a text, and the targets for your video elements:

We won't get into the CSS in this tutorial, but at minimum you probably want to hide the #addNumber and #videos elements when the page first loads. You can add that and any other styling to the existing stylesheet at style.css.

The first thing you want your client script to do is see if there's an id parameter in the URL. This indicates someone followed a link in a text to join an ongoing chat session. If there is, you can immediately fetch the credentials necessary to join from the /answer/:sessionId endpoint on the server. The handling of the server response happens in one of two functions, initializeSession or handleError, both of which we'll cover in a minute:

Having covered the less common case where someone wants to join a specific session, you can set up the scripting you'll use for handling actions in the interface. This is also a good place to define handleError. If you like, this function can be much more involved than its current form, where it just sends the error to the console. After that you can select top-level elements that will receive dynamic functionality. If the buttons you've selected exist you can assign them click handlers:

The process of initializing a question and answer session begins by clicking the Ask or Answer buttons. The handlers for those buttons, askQuestion and answerQuestion, are nearly identical. They first suppress the link's default action, then fetch chat credentials from the appropriate endpoint on the server. If it's possible to create or join a session, initializeSession gets called with their credentials. In the case of answerQuestion, if no one is asking a question the helper instead sees the option to provide their phone number:

The initializeSession function may be the most complex logic in the entire application. Amazingly, the OpenTok API is actually simplifying the logic needed. It takes care of coordinating between the chat session listeners and the DOM elements so that lower-level tasks like creating a <video> element and assigning its source happen behind the scenes.

The function first creates an instance of the session by supplying the OpenTok API the API key and session ID.

Static methods in the client-side OpenTok API are available under the OT variable. You can ignore any editor complaints about OT not being defined. However, for a more robust app it would be best to do some error checking and verify that OT is in fact defined. Conversely, you don't want to define OT too much by assigning anything else in your code to that variable, unless you change the default API object name first.

The first handler you need is for the streamCreated event. When a stream gets created on the current session, it will appear in the element with the ID subscriber. You can also add a handler to notify the client if they're disconnected from the session.

Next, define some properties for the publisher's video feed. The client is always the publisher from its own perspective. Their video will be 100% size and be appended to the publisher element.

With the minimum event handlers and configuration in place, you can connect to the session, adding the publisher feed to the client:

At this point, you should have a working hotline. If someone clicks the Ask a Question button, and someone else comes along shortly after and clicks Answer a Question, the two parties should find themselves video chatting and, hopefully, be able to solve all their JavaScript riddles. The only thing left to add is the ability to send a phone number to text in the event that there are no questions at the moment but one comes up later.

The addPhoneNumber handler is, like the button handlers, just suppressing the default event and then doing a fetch. In this case, you'll POST data to the server, setting the Content-Type to application/json and stringifying the value of the #phoneNumber field. If that succeeds, you'll hide the phone number input field again:

There are lots of different features you could add to your hotline, and lots of different hotlines you could create. It might be nice for users to see how many people are waiting with questions or answers, and it would add robustness to have the ability to reconnect to a session that dropped.

You can read more about what you can do with OpenTok on the TokBox Developer Center, and you can view and remix the code for this example on Glitch: